Susan May Warren welcomes readers to the Roaring 20s

Baroness Roaring 20s Kindle Fire Giveaway from @SusanMayWarren!
Find out what the reviewers are saying here!

Expected to marry well and to take the reins of the family empire, they have their lives planned out for them. But following their dreams -- from avant garde France, to Broadway, to the skies in the world of barnstormers and wing-walkers -- will take all their courage.  And if they find love, will they choose freedom or happily ever after?


Celebrate with Susan by entering her Roaring 20's Giveaway!

One grand prize winner will receive:
But hurry, the giveaway ends on 5/7/12. The winner will be announced on 5/9/12 on Susan’s blog, Scribbles! 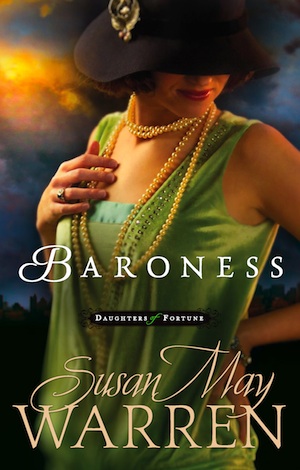 The nineteen-twenties birthed a time of turbulence and change. The end of a "war to end all wars" will do that. Young cousins Lilly, a Montana girl, and Rosie, a New York girl, find these times reflective of their personal lives. In Baroness (Summerside Press, March 6, 2012, ISBN: 978-1609366315, $14.99) both young women, touched by the cruelty of war, seek assurance of love and belonging: Lilly believes fulfillment lies back in Montana; Rosie, only in bright lights and adoration of the masses.


Expected to marry well and to take the reins of the family empire, they have their lives planned out for them. But following their dreams -- from avant garde France, to Broadway, to the skies in the world of barnstormers and wing-walkers -- will take all their courage.  And if they find love, will they choose freedom or happily ever after?

Susan May Warren's books are renowned for reflecting real life: the longings, failings, and redemption we all experience. True to form, Warren demonstrates in Baroness the value of knowing who you are and where you belong. Broken hearts, forgiveness, family loyalty, and unconditional love all serve to help Rosie and Lilly realize how to obtain true security of place and person.

Author Susan May Warren says, "No matter how far we run, how many 'lives' we try on, we will never find ourselves outside of God's love for us.  More than that, understanding His relentless love for us -- not unlike Oliver's love for Lilly -- changes us."

This second in the Daughters of Fortune series is a standalone title that follows the next generation of Prices as they deal with new life after the Great War and the consequences of their parents' choices. Along with Rosie and Lilly, you will learn the truth of Romans 8:38-39, that nothing is able to separate us from the love of God, which is Christ Jesus.

Susan May Warren is an award-winning, best-selling author of thirty-five novels with Tyndale, Barbour, Steeple Hill and Summerside Press. A four-time Christy award finalist, a two-time RITA Finalist, she's also a multi-winner of the Inspirational Readers Choice award, and the ACFW Carol Award.
Susan's larger than life characters and layered plots have won her acclaim with readers and reviewers alike. A seasoned women's eventand retreat speaker, she's a popular writing teacher at conferences around the nation and the author of the beginning writer's workbookFrom the Inside-Out: discover, create and publish the novel in you!She is also the founder of MyBookTherapy.com, a story-crafting service that helps authors discover their voice.
After serving as a missionary for eight years in Russia, Susan returned home to a small town on Minnesota's beautiful Lake Superior shore where she, her four children, and her husband are active in their local church.
Posted by Audra Jennings at 12:00 PM