April 27, 2012
Last week, I finished another baby blanket in middle of doing the bigger project I was working on. I got it done three days before the baby's arrival! An accomplishment given that I gave that the maroon and white one (aka the Aggie baby blanket) to the original recipient's baby brother almost two years after I started it. 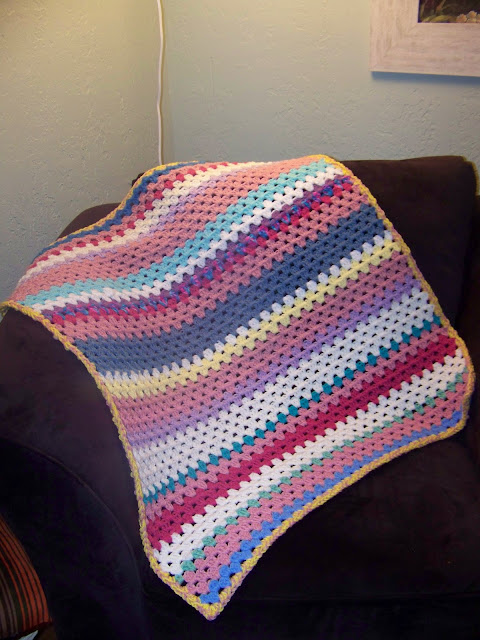 Now, I'm just a machine. I finished the one for the family reunion next week (to be given away as a door prize) last night. The center square that's multi-colored, and the first band of tan around it were crocheted by my grandmother over 8 years ago before she died. I actually don't know how long before that she did it. She just had a square too many from another afghan I guess.

I bought four colors of yarn to finish out this one because I didn't have enough of other colors to make it around and it needed to be a little bit bigger. I had a bin full of yarn that had been in my closet for 8 years. With the four projects that I've completed in the past two months, I've used most all of it up with the exception of some primary colors - bright red, gold and royal blue that just didn't match anything else except the "ugly blanket".

I did spend $24 the other night on more yarn to start other projects. It keeps me busy at least. Now, I think I'm making them to sell. The next baby due at church is the sibling of twins (a boy and girl) that got  theirs 5 years ago.

There have been 5+ people around here that want lessons. I hope they are easier to teach than Paige and Peyton because that has not worked out well the past few weekends. At all.
crochet