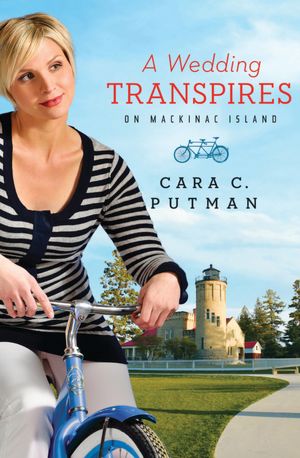 I'm sure Cara Putman has just about given up on me posting a review! I don't know why I have such a hard time trying to work reading into my schedule. Oh yeah, it's because I went crochet crazy for a while! Can you believe I haven't picked up a crochet hook for two weeks? That's beside the point.

It's been maybe two weeks since I finished A Wedding Transpires on Mackinac Island, but I always have an excuse about needing to blog something quickly instead of writing a review.

All of which are lousy excuses, of course. I'm just a procrastinator is all it really comes down to. Sort of always have been

About the book:  Attorney Alanna Stone vowed long ago to avoid Mackinac Island. Although it may seem like the perfect place to hear, for Alanna it holds too many memories of a painful past.

But an exhausting high-profile case and an urgent plea from her parents have brought Alana home. Moving into the cabin next to Jonathan Covington doesn't help her. Jonathan may have been her first love, but he was also her first lesson in betrayal. Now Alanna must protect her privacy and her heart. Then secrets and a murder intersect, and she's thrust into controversy again as tragedy turns public opinion against her and potentially her famiyl.

For years, Jonathan has stubbornly resisted the urging of his family and friends to date, believing he's already found the perfect woman. With Alanna's return, he begins to wonder if he's waited too long for someone who isn't the right one after all.

Will Alanna and Jonathan be able to lay aside the past and let God heal their hearts?


About the author: Cara C. Putman lives in Indiana with her husband and four children. She's an attorney and a ministry leader and a teacher at her church. She has loved reading and writing from a young age and now realizes it was all training for writing books. An honors graduate of the University of Nebraska and George Mason University School of Law, Cara loves bringing history to life. Learn more about Cara and her writing at www.caraputman.com and www.facebook.com/cara.putman.


My take: Of all the places I've been, I've never been to Mackinac Island. After reading Cara's vivid descriptions, I almost want to go. Almost only because it would be a really long road trip and it's been way to long since I've ridden a bike. Other than that, I'd load up tomorrow.

And why do all the guys in books have to be so darn like-able? So much so that you want to raise your hand and just claim that you'll take him for yourself. Actually, I guess with a good romance that's what you're supposed to want to do. In that case, Cara succeeded there as well.

As for the suspense part of the book, I can't say that I necessarily saw the mystery aspect of the end coming. But for a romantic suspense release, it was really more romance than suspense. I thought the drama/conflict was more in the relationship between Alanna and Jonathan than the secrets and murder. The love cynic that I always point out that I am could have used a little more drama/suspense in the murder part. But, that's just a personal preference, honestly.

Semi-spoiler alert, but not really -

As for the "A Wedding Transpires" part... With a title like that, you know that at some point there is going to be a wedding. You know that as your closing in on the end of the book a wedding is going to transpire or the author just did a really weird thing in naming the book. And in that case you would just be baffled, and rant at the end.

It sort of seemed like the wedding was just tacked on to the last few pages. Most books in the genre end with some kind of "and they all lived happily ever after", so you expect that. It just had me thinking through most of the book, "oh, you two, just get over the whole 'he/she must not be into me' bit. We all know what's going to happen."

Even with that said, if you aren't getting to tarry far from home on vacation, and you're ready to "get away" to a vacation locale, pick up A Wedding Transpires in Mackinac Island and enjoy yourself!


The author sent a copy of this book to me in exchange for my honest review.