Are you under any Glamorous Illusions?

Glamorous Illusions, the first release in Lisa Bergren’s new Grand Tour series, is a beautiful exploration of the covenant connection between God the Father and His children. Through the story of Cora Kensington, Bergren takes her audience on a European adventure of forgiveness, spiritual awareness, and self-discovery.

A person often identifies themself by their family, profession, or circumstances. However, as Christians, what would happen if we began to better understand our true identity in Christ? It is this spiritual journey that author Bergren guides readers through in Glamorous Illusions.

Q: Why do you think it is so difficult for us as Christians to remember our first, true identity?

We’re so absorbed in how our contemporary culture identifies us—by looks, career, family, wealth, faith—that we forget that our primary identity is a child of God. That no matter where we work or what we accomplish, no matter what happens and who is in our life (or isn’t), our core identity makes us valuable, treasured, cherished, forgiven, free and mighty. We are stronger than we could ever believe, through him, here to do his good work. But we buy in to the false identities our world gives us—which leaves us feeling consistently weak and wanting and wimpy. 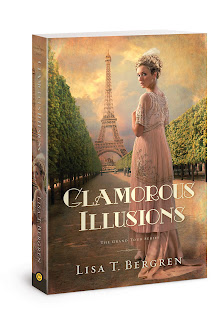 I get it. I really do. But if we could just seize that core identity and hold on to it, I believe we’d be as Catherine of Siena said “If you are what you should be, you will set the whole world on fire.” There’s a whole lot of untapped potential within each of us…and it’s tied to our understanding of our truest identity. Cora Diehl Kensington, my main character, is on an inner journey to discover that just as surely as she is on an outer journey through Europe.

Q: Before you begin a new series, how much time do you devote to research of a time period or location?

I like to be reading and researching a good six months before I begin writing. Research gives me context, as well as potential plot points to incorporate.

Q: Why do you think “Downtown Abbey” is so hot among the American audience? How does your Grand Tour series relate to that craze?

At its core, I think “Downtown Abbey” is a story about community, made up of many different personalities. There are two subsets to that community, obviously, between the servants and their wealthy employers. But those two circles intersect and they’re really all one. And many of their issues are the same—the quest to face sins and errors of the past, seek forgiveness, rise in status (or put it in its proper place), and find true love.  These are all themes that relate to us in America, regardless of where and how we live. They’re universal themes. And they appear in my book too. Add to that the European settings and I think it’s inevitable that there will be some comparisons.

Q: At one time, a world tour was a popular custom for young adults in Europe as a part of their education. Do you think young adults today would benefit from travel and seeing what other cultures are like?

I’m a huge champion for world travel for all. Given our current economic woes, that dream feels pretty distant for many Americans, but you can catch a glimpse of other culture, right here in the US too. Sometimes it only takes a day’s drive to feel something “foreign.” Sometimes it’s only an hour away! But the point is this—we get so absorbed in our little microcosm of life that we begin to think that our world is like everyone else’s. Or we have a hard time caring for anyone outside of our little bubble. Exploration, outside The Bubble, helps us identify differences and commonalities among all of God’s people, and sows seeds of understanding and grace.

Q: We’re introduced to Cora’s travel companions who have struggles of their own. What are some of the inner conflicts they face?

They all have principal vices and sins that they are struggling with. Pride, greed, lust, laziness, anger… I like that at first, Cora uses those sins to dismiss each of them. She uses them as a sort of barrier that she can justify. But as they travel together, she finds she herself struggles with a measure of each of those sins too. She is not immune. She is not perfect. And discovering that allows her to extend grace to each of them, which also encourages growth and healing.

Q: As an author, you have written books in several different genres, including children’s books. What has drawn you to historical women's fiction in your past few series?

I love that it provides such a rich backdrop to my story. It immediately feels like my tale has more depth and intrigue with a historical tapestry behind it. In this time period, the world is on the brink of so much—World War I, the right to vote for women, Prohibition—but at that moment, it’s rather innocent. Full of hope and promise, but with whispers of warning in the air that change was coming…

Learn more about the author and her books at lisatawnbergren.com.