Why I'm a terrible, yet wonderful aunt

June 20, 2012
When Paige was about a year and a half old, I moved back in with my parents for about 6 months. At the time, I lived in a 'hood. Every time my friend Sammy came over to my house, the cops would be making a visit when he left. He used to tell me, "I used to live in the 'hood, so I can tell you you're living in it."

One night, I came home to find the police looking for gun shells in my front yard. The final straw came when my presumably drugged out neighbor came over one night to tell me that her side of the duplex had been broken into during broad daylight (on Halloween). Whatever the circumstances may have actually been, I decided that was enough.

All that really doesn't have anything to with the point of my story other than to explain why I was living with my parents. I felt a need to justify that since I was in my mid-twenties at the time.

Anyway, during that time, little Paigey was over at my parents quite a bit while her mom was in night school classes and her dad was cutting hay, hauling hay, tending to cows, etc. Paigey would come into my room wanting to watch a movie. I had a large selection of Disney movies since I collected for a long time. The one she always wanted to watch though was "Mike" or as most people know it, Monsters Inc.

I had introduced it to her at some point, so I admit this is my fault. And yes, I showed a 1 year-old a movie about monsters jumping out of closets scaring kids while they were asleep. Although it's a kid's movie, her age might have been a little on the young side for such a movie.

"Can't we watch something different this time?"

Somewhere along the line, I introduced her to Stitch. He's much scarier than Mike, but we started off the movie where the fish swim around and Lilo dances.

I can't tell you how many times Paige and I watched "Mike."

That year for Christmas, I was so proud of myself. I bought a stuffed Mike for her at The Disney Store and couldn't wait for her to open it.

She was terrified! She didn't want to get near the stuffed Mike. I felt terrible, like I had traumatized her.

Paige and Mike did become friends after a little coaxing. Here the three of us are. I think that's my brother's knee in the picture. Our family hasn't always been the best at taking pictures. And yes, it took me some time to dig this up from 9 1/2 years ago. 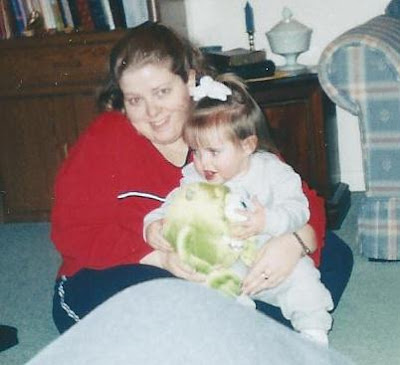 Someone else gave her Sully around that time too because they knew she was a little obsessed.She has since shared the joys of watching Mike over and over with her little step-brother Layton. This may be why he wants to sleep in her bed with her, but...

For a while now, Paige has been talking about how there is going to be a Monsters 2 and how I am going to have to take her since that was our movie. Of course, I'm not going to say no to that. In a day not so far in the distant future, I know I am not going to be so awesome to her anymore.

I was so pumped when I saw this teaser for the prequel, Monsters University today. I can't wait to show it to Paige. She was over here last night, and left just a couple of hours before I saw it.

Now, I'm just terribly bummed that it isn't coming out for a whole other YEAR! One year from today, June 20, 2013. Well, at least I know what I'm going to do for her 12th birthday which is 2 days later.

By the way, in case I forget to post it in two days, "Happy 11th Birthday Paigey-beth!"