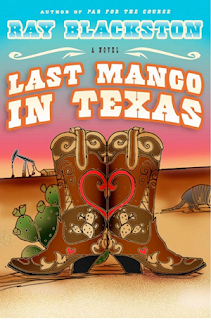 Last month, I did the blog tour for Ray Blackston's Last Mango in Texas with a promise to post a review as soon as I finished the book.
I jumped on the chance to pick this book up on the blog tour because I've read all except one of the author's books (A Pagan's Nightmare just didn't compel me to buy it even though I've thought about it), so I was going to eventually buy this one at some point if it didn't come up on tour.
I'll start off by giving you the book description:
Texas Tech student Kyle Mango is attending a fraternity party when he meets Gretchen, an artsy animal lover whose independent spirit immediately sparks his attention. But after a month of bliss, they suddenly find themselves in rough waters. When Kyle inherits four oil wells from his uncle, he sees his affluence as an opportunity to impress Gretchen. But just before he makes his move, Gretchen hears news of an oil tanker spilling its load near the coast of Alaska. Leaving Kyle behind in Texas, she joins a group of campus activists in Alaska for the summer to clean oil from suffering birds.
Kyle is torn between managing his business--and being left lonely in the Lone Star state--and risking everything to fly to Alaska to pursue Gretchen. The young oil man soon discovers that oil slicks are nothing compared to relational slicks. The early bird may get the worm, but the oily bird can ruin romance! Through it all, Kyle explores faith in God and His power to change lives.
It was definitely the lighthearted read that I needed. I was certainly entertained by the book. All of the author's books are great reads for singles in their 20s especially.
However, I think that his book endings are getting a predictable. There were a lot of parallels between Kyle Mango in this book and Jay Jarvis in the Flabbergasted series along with a lot of similarities between Kyle's girlfriend Gretchen and Jay's girlfriend Allie. It's a book with a happy ending that I had figured out ahead of time.
Overall, though, I would recommend Last Mango in Texas to all my readers, whether you have read any of Ray Blackston's other books or not. If any of my local readers would like to borrow this one or any of the others from my library, just let me know!
Now, I have to decide what my next for fun read will be. I have some books I bought back in January with my Christmas giftcard that I haven't gotten to yet, then have a stack of CBE books from my friends at "WaterNomah" as well. Speaking of WaterBrook Multnomah, I signed up for a May tour of Enduring Justice by Amy Wallace, so I need to read it as soon as it arrives. Hmmm... I guess I'll keep everyone, including myself guessing.
Note to self... save the big thick book for the trip to South Dakota. You'll need it...
Last Mango in Texas Ray Blackston

Mimi N said…
I wasn't able to finish reading Flabbergasted because it overwhelmed my senses. In that, I mean he was too descripted for me. Is that possible? It was for me. This was an interesting book.