April 06, 2009
Every year, my dad and I go to the Texas Rangers Home Opener. (I've been to all but one of the past eleven.) It's always an exciting atmosphere and everyone is geared up for a new season and there is hope for a successful season.
The pre-game activities are always the highlight of the day. Especially the fly over with the military planes. It gives me goosebumps every time. You can hear the roar on approach, and they fly so low that it's so just awesome.
AND... the Rangers beat the Cleveland Indians 9-1 today. YEA!!!
It was in the 50s today with the wind chill pushing the temperature on down. It was down right COLD in the concourse area. If you were in the shade or up high where the wind hit, you were freezing. Thankfully, we were in the sun (just see my face and my hands that were sticking out of my sweatshirt), so it was really nice.
Here are some pictures. 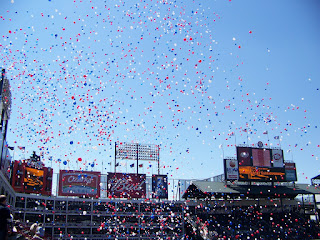 Somehow, the balloons were set loose too soon. Because of the wind, they blew around a while before they floated off. 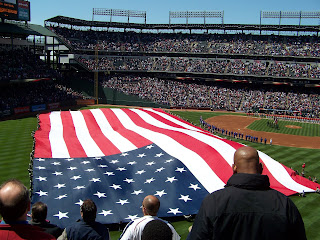 Members of the military that recently returned from Iraq were a part of the pre-game festivities, including bringing out the huge flag. 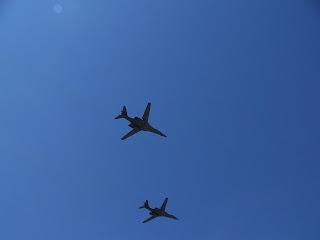 The fly over is always my favorite part. 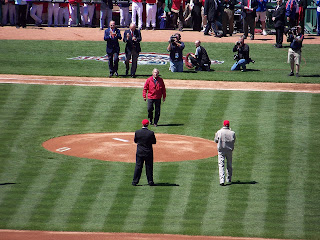 That would be former President George W. Bush in the red jacket. He threw out the first pitch which by the way was a strike. 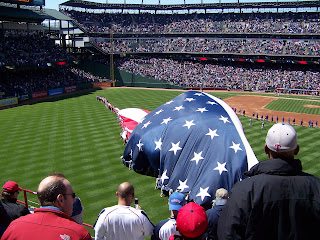 Due to the wind - and lots of it - there were some problmes getting the flag rolled back up. See how small the people are down on the field compared to how high the flag is blown up. 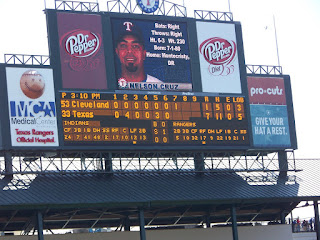 The Rangers win! Except this is in the bottom of the 7th, not the end of the game.