July 23, 2013
Suzanne Woods Fisher is celebrating the release of
A Big Year for Lily, book three in the beloved
Adventures of Lily Lapp series,
with a giveaway extravaganza!

Don't miss a moment of the fun; enter today and be sure to visit Suzanne's blog on the 29th to see if you won one of the fun prizes!

(Or better yet, subscribe to her blog and have the winner announcement delivered to your inbox!)

{MORE ABOUT A BIG YEAR FOR LILY}
Book Three in the Adventures of Lily Lapp series. Co-written with Mary Kinsinger. 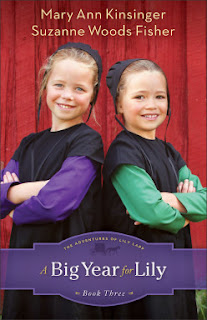 Lily Lapp’s family has settled into their new home in Pennsylvania, but life still holds big changes and big steps for Lily. Good changes, like once again living close to her beloved cousin and best friend, Hannah. Bad changes, like a mean girl who plays tricks on her. And no change at all where Lily would most want one–Aaron Yoder sits near her in school and relentlessly teases her. Surprises are in store for Lily as she learns, with Mama and Papa’s help, to manage the ups and downs of growing up Amish.
The third of four charming novels that chronicle the gentle way of the Amish through the eyes of a young girl, A Big Year for Lily gives children ages 8-12 a fascinating glimpse into the life of the Amish–and lots of fun and laughter along the way. It combines Mary Ann Kinsinger’s real-life stories of growing up Amish and the bestselling writing of Amish fiction and nonfiction author Suzanne Woods Fisher. With charming line drawings in each book, this series captures the hearts of readers young and old.
Purchase a copy here.
Learn more about the series, play games and download the coloring sheets at the Lily website.

Suzanne Woods Fisher is the bestselling author of the Inn at Eagle Hill series, Lancaster County Secrets series, and the Stoney Ridge Seasons series, as well as nonfiction books about the Amish, including “Amish Peace.” She is also the coauthor of a new Amish children’s series, The Adventures of Lily Lapp. Her interest in the Anabaptist cultures can be directly traced to her grandfather, who was raised in the Old Order German Baptist Brethren Church in Franklin County, Pennsylvania. Suzanne is a Carol Award winner and a Christy Award finalist. She is a columnist for Christian Post and Cooking & Such magazines. She lives in California. For more information, please visit suzannewoodsfisher.com and connect with her on Twitter @suzannewfisher. Get Amish proverbs delivered right to your mobile device! Download the Free App! http://bit.ly/10Tygyi
Find out more about Suzanne at suzannewoodsfisher.com.
A Big Year for Lily children's books iPad giveaway Life with Lily Revell Suzanne Woods Fisher