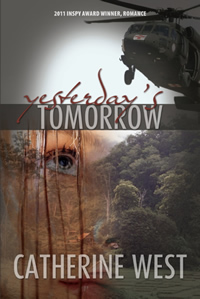 She’s after the story that might get her the Pulitzer. He’s determined to keep his secrets to himself.
Vietnam, 1967. Independent, career-driven journalist Kristin Taylor wants two things: to honor her father’s memory by becoming an award-winning overseas correspondent and to keep tabs on her only brother, Teddy, who signed up for the war against their mother’s wishes. Brilliant photographer Luke Maddox, silent and brooding, exudes mystery. Kristin is convinced he’s hiding something. Willing to risk it all for what they believe in, Kristin and Luke engage in their own tumultuous battle until, in an unexpected twist, they’re forced to work together.
Ambushed by love, they must decide whether or not to set aside their own private agendas for the hope of tomorrow that has captured their hearts.
Purchase a copy here.
Learn more at Catherine’s website.


Catherine West is an award-winning author who writes stories of hope and healing from her island home in Bermuda. Her first novel, “Yesterday’s Tomorrow”, won the INSPY for Romance, a Silver Medal in the Reader’s Favorite Awards, and was a finalist in the Grace Awards. Catherine’s second novel, “Hidden in the Heart”, was also a finalist for a Grace Award. When she’s not at the computer working on her next story, you can find her taking her Border Collie for long walks or tending to her roses and orchids. She and her husband have two college-aged children.
Find out more about Catherine at http://www.catherinejwest.com.
Catherine West OakTara Yesterday's Tomorrow