August 31, 2013
I would say that I didn't know what was up with Peyton yesterday, but what was up is that I played into one thing and got sucked into something bigger.

Today was Mom's birthday, so she and Dad went out to pick up the girls and bring them into town so they could spend the day. Paige wouldn't let Peyton use a certain tool in the yard, so Peyton's feelings were sort of her. The "mean ol' Paige" thing.

I told her I would take her with me to get a bag of chips at my house since we needed them to go with our lunch a little later.

We went to get the chips, then to an estate sale where we bought this hen shaped cookie jar as birthday present, "just from ME and YOU, not from Paige." Oh, we saw a guy washing his airplane (minus the wings) at the car wash on the way. 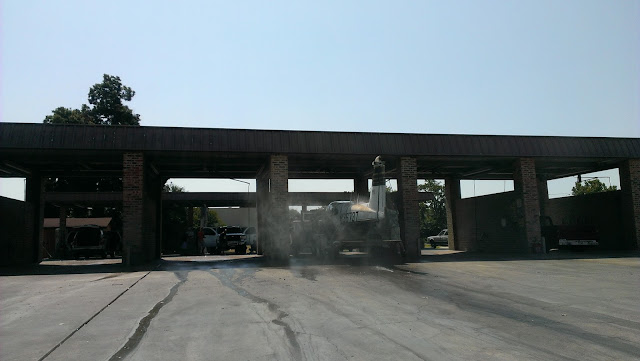 Because I got my hair cut last week, Peyton decided she wanted me to take her to get hers cut. OH, how she begged. I told her that getting a walk-in appointment anywhere worth going would be really hard, especially on a Saturday, not to mention a Saturday on a holiday weekend. She even did a web search of who might be open on a Saturday from my phone. 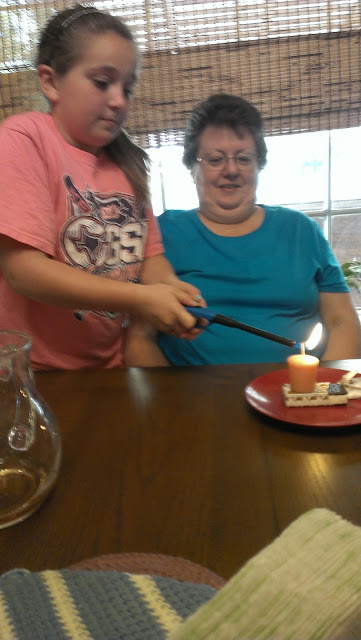 Later we had to go back to my house for something else, back to my parents' for lunch. (Yes, that's a votive candle on an ice cream sandwich. Back to my house "because I'll even go to the grocery store as long as I get to go with you" to give her a manicure with special tiny sea creatures on one hand and dots on the other. More begging about the hair. To the grocery store to buy stuff to make cupcakes since she said she was willing to go to the store. We artfully made cupcakes (with food coloring swirls inside), then, back to my parents where Brian joined us for dinner. 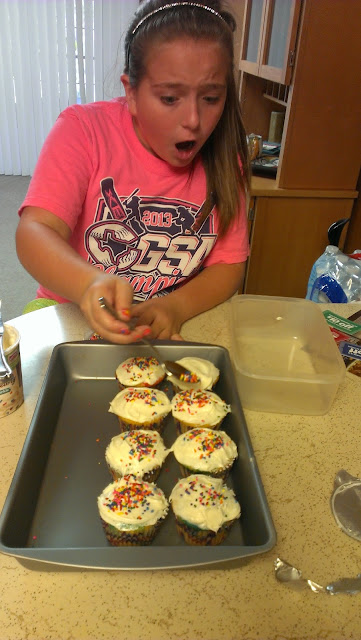 I could barely stay awake to work on my lesson for in the morning because I was so worn out by the time the night was over.

Chances are that now, I'll be going out to her house swimming with her tomorrow. I predict no nap.
birthday