Dr. Jekyll (or was it Mr. Hyde?) kept scaring the bejeebers out of me

Our little group of girlfriends now has officially deemed the first Saturday of every month Girls' Night Out. This time, Jenny was sick, and we sure did miss her. We should have had a picture with us looking sad that she wasn't there.

We sat in a booth next to another booth that was inside the Sorcerer's Apprentice's hat. Our waiter was Dr. Jekyll and Mr. Hyde. He was kind of a jerk, but he did hold his accent the whole time unlike our waiter last year at the Cheesecake Factory. He fed all of grapes before shoving them into Ashley's mouth and down her... let's just say she had grapes in an interesting lace.

He was really loud and every time he came up to us, he made me almost jump out of my seat. Anytime he got near I prepared myself in anticipation of his booming voice.

Afterwards we went to Starbucks so Rakia could look at the scrapbook it took me a year to complete. Then, Starbucks kicked us out at 9:00. One of the earliest closing Starbucks, I guess.

Angie and I had a bit of an adventure on the road, then I thought she was going to back over me in the parking lot. Oh, but before that she almost got us both run over with a u-turn in front of a car. Let's just say we got our laughs in, but now I can't remember what else I was going to share. Maybe it will come to me.

If Angie uploads her video from dinner, I'll share. Rakia held up her phone to record the song and presentation of our dinner, but didn't hit the record button. I have a picture of Angie trying to watch the playback though. 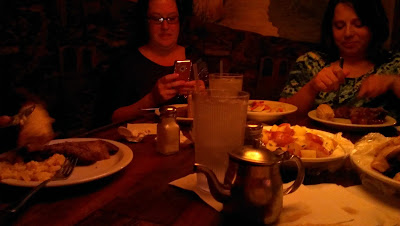