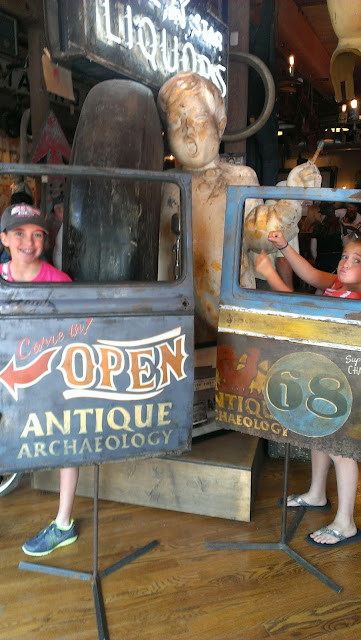 Take it away Paige!

Woke up after a restless night. Went and ate continental breakfast and then loaded up and left the hotel to go around Nashville. Parked in a Lifeway parking lot where Peyton and Audra went to shop while Pops and Granmal and I went to walk down Broadway.

Then we drove and drove in circles to get somewhere to eat. We ended up getting Pizza Hut. Next, a look around the Grand Old Opry building then the humongous Gaylord (lots and lots and lots of circles around the parking lot AGAIN).

Then back on the road home. I'm soo hyper I could run a marathon. Peyton was sick as a dog and then we stopped at Burger King. I kept every one awake and then we stopped in Jackson, MS to stay in the same hotel as last weekend on the way. We saw a ton of stuff today to close off our last day in Tennessee.

As positive has Paige has been throughout, she really must have had a hard time sleeping Wednesday night. The air was not working right for one thing. She was sleeping on the fold out couch. I can identify with a rough night. The bed I shared with Peyton was leaning to one side and Peyton was in middle of it pushing against me. And it was quite warm to try to sleep.

My parents and I were so glad we could get into Antique Archaeology after the store in Iowa was closed for taping when we went by. The souvenirs we bought had both locations on them since we didn't get anything on that trip. We recognized a lot of the items in the store from when they were purchased.

I don't know if it was swimming in the cold or just allergies (my guess), but Peyton was miserable on the ride out of Nashville to Jackson Thursday afternoon/evening. She laid out in the backseat with me after we stopped to eat. She was sneezing her head off.
American Pickers Antique Archeaology Gaylord Grand Ole Opry Nashville