August 23, 2013
My boss Amy, the owner of Litfuse Publicity Group, is more than a bit of a foodie. If you were to scroll through her Facebook, Pinterest or blog, you'd find lots pictures of food from restaurants she's gone to or recipes she has tried out at home. In these pictures, you would find culinary endeavors you've probably only seen on Food Network's Iron Chef America. Her husband owns a food tour company in Seattle, White Moustache Urban Adventures, so they go places and try foods way outside the comfort zone of most of us.

I'm the complete opposite. You know me. I lament about cooking for one. I blog about making the world's most disgusting potato soup. I barely keep the most basic of ingredients in my kitchen for the rare occasion that I do actually cook. 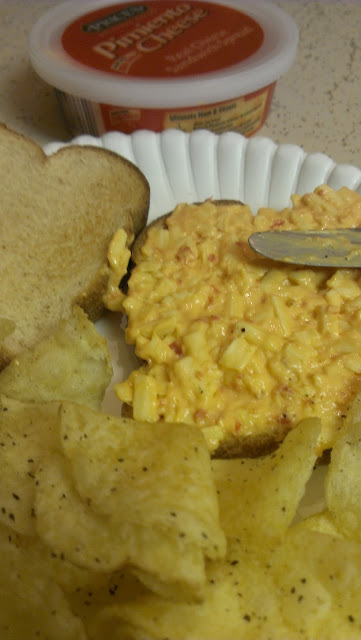 This week's discovery... the pimiento and cheese sandwich.

Yes my friends, you heard me correctly. The pimiento and cheese sandwich. Not even a homemade variety at that.

One day this week (all my days have run together lately... I blame it on being a hermit), I made the comment, "I'm going downstairs to make a pimiento and cheese sandwich."

It's when I say this that my two co-workers who are under 25 and from the states of Indiana and Ohio originally (and now live in Nebraska) ask me what that is as they do not know what this is. "Well, it's pimientos and cheese... on a sandwich."

I mean, if you make the stuff from "scratch" it's only 4 ingredients, pimientos, cheese, mayonnaise and bread. I don't really like the homemade version myself because it can be too tangy, but I digress.

At this point, Caitlin says it must be a southern thing. I throw out a comment about Yankees. (Jokingly and lovingly, of course. Remember... I'm from Texas and anyone who lives north of the Red River is a Yankee, including some of the people from states touching the Mason Dixon line to the south.)

I had to take a picture to show them what my sandwich looked like.

I never thought about it, but it is indeed a southern thing, evidently. I just never thought about anyone not knowing what P&C was. The most popular brand in stores is Price's, and if I heard the story, and remember it correctly, the guy that sold the recipe to Price's lives on the lake about 30 minutes away from my house.

Another co-worker who knew what a pimiento and cheese sandwich was thought that pimiento was a kind of cheese. It is actually a kind of pepper you buy in a little jar already all chopped up. Obviously, her mom or grandmother didn't make it themselves when she was growing up.

It's certainly no delicacy, and it's not even really that great, but it was a food lesson this week.

If I were to try out for The Next Food Network Star, which I won't because I don't cook, my show would be to introduce people to simple foods that people of a certain region would never imagine to be a delicacy or unheard of in other parts of the country or world. Or maybe I would just school Yankees on the south! ;)

All this talk of southern food makes me hungry for Chicken and Dumplin's and some fried okra. I need to get those Omaha girls down south for some Cracker Barrel!
Food Network Iron Chef America Price's Pimento and Cheese

Audra Jennings said…
It didn't taste like ground up mac and cheese though. ;)