A Most Noble Heir by Susan Anne Mason

March 22, 2018
Here's another new release I wanted to let you know about. All information is courtesy of the publisher, Bethany House. 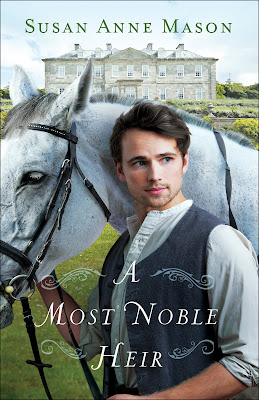 About A Most Noble Heir

Will Gaining the World Cost Him Everything He Holds Most Dear?When stable hand Nolan Price learns from his dying mother that he is actually the son of the Earl of Stainsby, his plans for a future with kitchen maid Hannah Burnham are shattered. Once he is officially acknowledged as the earl's heir, Nolan will be forbidden to marry beneath his station.Unwilling to give up the girl he loves, he devises a plan to elope--believing once their marriage is sanctioned by God that Lord Stainsby will be forced to accept their union. However, as Nolan struggles to learn the ways of the aristocracy, he finds himself caught between his dreams for tomorrow and his father's demanding expectations.Forces work to keep the couple apart at every turn, and a solution to remain together seems farther and farther away. With Nolan's new life pulling him irrevocably away from Hannah, it seems only a miracle will bring them back together.

Susan Anne Mason's debut historical novel, Irish Meadows, won the Fiction from the Heartland contest from the Mid-American Romance Authors Chapter of RWA. Also a member of ACFW, Susan lives outside of Toronto, Ontario, with her husband and two children.

She can be found online at www.susanannemason.com.