The Best of Me

March 04, 2012
Maybe once I get into a good routine, I'll be able to do a weekly book review. I'm still amazed at how many books some bloggers are able to read. (Although I do have a backlog of books that I never posted about that I've read over the past several months.) It's come to the point where now I am about to hit my "reserves" of books I bought on sale to read when I got around to them or between other books. I picked up one book earlier to start, but I think I'm going to put it back because I just now remembered I started a book while sitting in Branson at the mall that was hit by the tornado. After the rest of my traveling party arrived, I didn't open the book again.

Honestly though, I don't think I'll read that book right now either because I need something funny. The last few books I've read have turned out to be a bit depressing in the end. I want to laugh. If you have any suggestions, please feel free to leave suggestions.

Every Christmas, I ask for the latest Nicholas Sparks book. It makes my Christmas list simpler that way.   I had read several work-related books in a row, and just got around to getting to read The Best of Me. 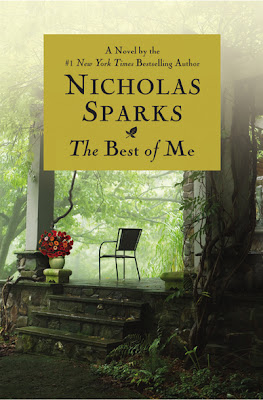 "Everyone wanted to believe that endless love was possible. She'd believed in it once, too, back when she was eighteen."

In the spring of 1984, high school students Amanda Collier and Dawson Cole fell deeply, irrevocably in love. Though they were from opposite sides of the tracks, their love for one another seemed to defy the realities of life in the small town of Oriental, North Carolina. But as the summer of their senior year came to a close, unforeseen events would tear the young couple apart, setting them on radically divergent paths.

Now, twenty-five years later, Amanda and Dawson are summoned back to Oriental for the funeral of Tuck Hostetler, the mentor who once gave shelter to their high school romance. Neither has lived the life they imagined... and neither can forget the passionate first love that forever changed their lives. As Amanda and Dawson carry out the instructions Tuck left behind for them, they realize that everything they thought they knew--about Tuck, about themselves, and about the dreams they held dear--was not as it seemed. Forced to confront painful memories, the two former lovers will discover undeniable truths about the choices they have made. And in the course of a single, searing weekend, they will ask of the living, and the dead: Can love truly rewrite the past?

Nicholas Sparks is the author of 16 books. He lives in North Carolina with his wife and children. You can visit the author's web site at www.nicholassparks.com.

Sometimes, I just don't know why I submit myself to the torture. Anyone who has read more than one Nicholas Sparks book knows there will be at least one person die somewhere along the way if it doesn't center on someone who has died already. And at least one character is tortured by their past as it relates to the person who has died. This book has more death than usual, actually.

And the woman doesn't know what she wants or who she really loves because there's always a man in her past. And the man will only ever love this flaky wishy-washy woman and can't deal with life normally. And someone wants to beat someone up in a bar fight. (OK, so not always on that part.)

This time, I seemed more tortured than I have in the past. It's so predictable. Why does it have to be so predictable? (By the time it got close to the end, you easily figured out what was about to happen and therefore could have stopped reading before the last few chapters.) Surprise us for once by letting everyone live happily ever after. Yes, that wouldn't be realistic, but don't we all need an escape?

I know this doesn't necessarily speak to the book itself. I really don't know what to say that won't give away the actual specifics.

Did anyone read The Best of Me that wants to have a discussion here about anything redeeming they want to share?


Hachette Book Group Nicholas Sparks The Best of Me