Why must everyone at church want to set you up?

March 25, 2012
Not that I ever plan to write a book, but I think I could write a book based on the things the kids in my 5th grade Sunday Bible class say.

This morning, the topic was happiness, and I must have been guilty as charged regarding getting them stirred up (yes, I was told by one of the students that it was my fault they were loud).

Before everyone arrived, we were playing a game as suggested in the materials. The first person had to say, "I would be happy if i had a lot of _____." Their item had to start with an A. The second person had to say the first person's item, then add in an item of their own with a B. The third person, A, B, and C. I played along.

As I was trying to give examples, one of the girls said, "if I was married" directing that comment toward me. I tried to get them on track because I only recall one conversation ever that might have led them to think I would want to discuss this. (Probably when I told them that when the preacher asked each Sunday night, "and who are you going to marry when you grow up?" the answer just might be "NO ONE!!!")

Anywho... the game starts. I do a lot of reminding of the list since someone came in late.

B (Why can I not remember what B was?)


At this point, the girl I mentioned before was having trouble thinking of everything and we were in a hurry, so the girl between her and I was coming up with a G, or had said her G word when I was trying to come up with an H. At this point the girl obsessed with my singleness says, "I have an H for you. A husband."

I declare this the end of game. I've had enough of this direction and decide we need to move along. Plus, that's just plain wrong of them!

During worship service this morning, I had a rather funny private joke moment. We do sometimes get in a rut of singing the same songs at church and need to branch out. This morning, the song leader branched out.

He led "Beautiful Star of Bethlehem." Now, I don't know about other churches in other parts of the country, but I have never in my life sang this in church. And I have been to a few congregations in my lifetime with a number of song leaders.

I did actually know the tune though because a former co-worker got an Oak Ridge Boys Christmas CD after pledging to PBS or something. And with my eclectic (or strange) taste in music, I borrowed it and had it on my iPod until my old computer died and I didn't have the CD to add it back on to iTunes.

So, the whole time I'm singing this song, I'm trying to sing it to the tune that the song leader is leading it yet hearing William Golden's voice in my head the entire time. This is quite distracting and had me trying not to laugh for all three verses. I passed a note down to my mother knowing she would actually appreciate this, and I'm lucky she didn't laugh for all the church to hear. 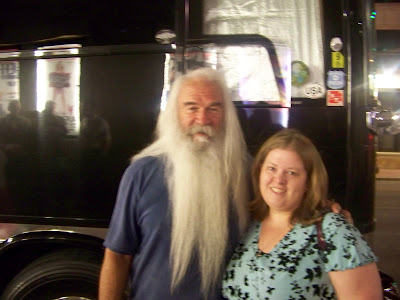