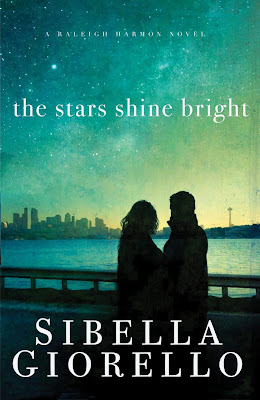 You Can’t Hide from the Truth

Popular suspense author Sibella Giorello gives her readers the mystery, intrigue and excitement they’ve been waiting for in The Stars Shine Bright (Thomas Nelson/July 17, 2012/ISBN: 978-1-59554-536-7). Known for her in depth research, the latest installment of Giorello’s critically acclaimed Raleigh Harmon series brings readers into the world of crime solving and forensics as well as the darker realms of horse racing and gambling.

The Stars Shine Bright explores the consequences of lying, especially those deceptions meant to protect someone you love. The story follows Raleigh Harmon, FBI Special Agent and forensic geologist, as she struggles to redeem her career and re-start her life following her suspension from the Bureau for bending its rules. Raleigh’s newest assignment sends her undercover to a thoroughbred horse track to uncover who’s fixing the races. But when horses start dying and her own life is threatened, Raleigh realizes something bigger and more sinister ruining Emerald Meadows.

Living her double-existence undercover as a wealthy scion of the racing world, Raleigh’s never felt more alone. Or more pressure. Her fiancé wants them to begin their life together—now -- but she can’t make any contact with family during her assignment. Meanwhile her mother is confined to a state mental hospital, following a psychotic breakdown, and her one contact with the FBI is Special Agent Jack Stephanson, a guy runs the gamut from jerk to genuine friend at any given moment.

With just days left before the horse season ends, Raleigh races to stop the killing and find out who’s behind the deadly plot, while still trying to determine if Jack is friend or foe, and whether marrying her fiancé will make her life better—or worse.

Giorello puts a unique spin on the popular genre of forensics, focusing on forensic geology and mineralogy. With a background in geology, she shares with her heroine a belief that science and faith are not opposing studies but ideas that go hand-in-hand. “For evolution to work—for random chance to be the operating system in the universe—we should be witnessing tornadoes blasting through junk yards and building F-15 fighter jets. But we see the exact opposite. There’s a grand design to the natural world, and a design means there was a designer.”

Giorello credits her favorite mystery authors, such as John D. MacDonald, and growing up in a courtroom where her father served as judge as inspirations for writing crime fiction. Giorello’s also inspired by the Bible. “Whenever I say that, some people groan, but those 66 books are sheer poetry, and they cover the most crucial questions. Who is God? What's life all about? Why are we here and what's the plan—for individuals and for humanity?”

Giorello’s strong yet flawed heroine appeals not only to both male and female readers, but to Christian and mainstream audiences alike. As the Seattle Times once noted, “You don’t have to be a Christian to enjoy her books.” She hopes to bridge a gap between audiences. “There are readers who don't want to 'get inside the mind of a killer', and they don't want a lot of cursing and extramarital sex. At the same time, they want something gritty, something more than sugar-coated life. The Raleigh Harmon mysteries offer readers an intriguing puzzle with a smart and sensitive protagonist. She’s cool, honest and very real. She knows God exists, even as she manages to mess up her own life. "

She found herself in Seattle writing for rock-n-roll magazine and earned a journalism degree from the University of Washington before heading south to the land of great stories. In Virginia, Sibella became a features writer for the Richmond Times-Dispatch. It was there she also met her husband and would hear Jesus whispering her name at a tent revival.