Wavy Jones - the Duck, not the Monkee 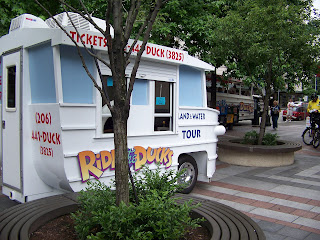 This morning, we got up a lot later than the 3 AM Texas time yesterday. It was great to sleep!

We took the shuttle with a family from Texas. They guy's dad lived in Hubbard. The shuttle took us to the train to go into downtown.

We went into Nordstrom's to go to the restroom. They had some $195 shorts on sale. And some guy had his dog in the store. I can't believe they let his dog in that high $$ store.

We bought our tickets for the Duck tour. Guess who's getting a quacker when I get home!

We went into a Starbuck's until our Duck loaded. The guy at one of the 117 Starbuck's in Seattle could not remember what was in the drink that I wanted, but the people in Target in Waxahachie and Ennis can.

There was a family in Starbuck's from Oregon with Ranger caps. They went to the game last night, then found out where the Rangers were staying and got Josh Hamilton to sign their caps.

Our Duck driver, Wavy Jones, was awesome. Except when he played Willie Nelson music. We got to go out on Lake Union and see the houseboats and around town.

When we finished our tour, we went to the Pike Place market. We saw the World's largest piggie bank, which Paigey would love. A million cherries which Peyton would love, tons of gorgeous fresh flowers that Granmal would love, and fish that Pops would love. And a wall full of chewed gum that was just really gross.

It was a really cool place. But we didn't really see them throw fish. We did buy prints from a woman who painted 6 legged cats dancing at the Space Needle.

We decided next time we needed to go on the Alaskan Cruise. The ship was humongous. We walked past it on the way to get our tickets for tomorrow to take the boat to Victoria.

We wanted to take the giant ferris wheel, but the line was sososososo long. Maybe Tuesday since everyone was out on the weekend.

I got to the original Starbucks to buy a mug! I tried to find a goat leg at a bakery, and ended up with a cheesecake brownie. Since everything was closing down for Sunday afternoon, we came on back to our hotel.

We hope to see whales tomorrow. That would be awesome.

Talk to you soon! 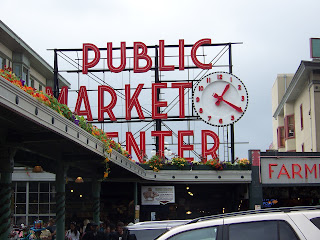 Sounds like y'all had an awesome time and can't wait for a pictures of that pig. Yo day I had an experience I think I might of broke my nose and it is killing me and I have know gone swimming with people who are half skinny dip pin witch is still not topping the cupcake at the ranger game or the worlds largest piggy bank. (I love pigs) Glad y'all are still having a great time with out me! Can't wait to quack my quacker! I love you bunches!!!!!!!! -Paigey-Beth