July 23, 2012
I did a really good job of emailing Paige like she emails me when she is on vacation... for the first 5 days until we crossed the Canadian border, and I didn't want to pay an arm and a leg for data service. Free wi-fi was not so readily available.


To give you a summary of my trip, I'm going to share with you the emails I sent Paige and my parents (I still owe her one for the last three days - she's on another trip now!). Just keep in mind that my recap was especially for her, including food updates like she does. And I was typing on my BlackBerry. 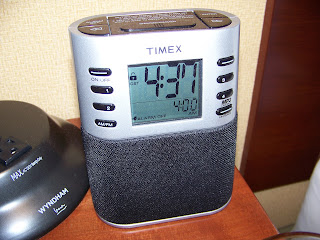 I cannot promise my emails will be as good as the great Paigey-Beth's.

On Friday, we could not get a flight out of Dallas. The airport was crazy because of delays and cancellations in Houston. 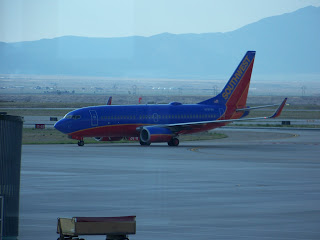 They told us to come back at 5 AM on Saturday to check in for the 7 AM flight to Al Albuquerque. Instead of going to Rakia's house, we decided to go to a hotel instead to be close. I had only slept maybe five hours the night before trying to get work done and packing, so I took a nap about 7 PM. Oh, and our bags were sent to Seattle.

We went to the restaurant, came back and tried to go to bed right after 10. Tried. But I could not sleep. Don't know what time I fell asleep.

Before we went to bed, we set the alarm, and I called for a wake-up call. When I told the operator for 4:15, he said OUCH. I was awake though at 3:15 when Rakia went to the bathroom. We talked and laughed and probably could be heard by the people next door. 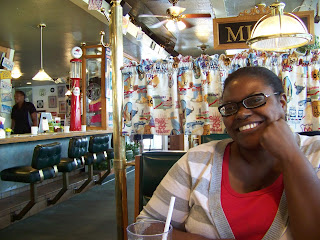 I was so exhausted from no sleep, I was queasy and dizzy. I only could eat 2 bites of McDonald's and threw the rest away. Thankfully, we did get on the 7 AM plane to ABQ. After a nap on the plane - everyone was sleeping - felt a million times better. But they didn't have Starbucks and the coffee was gross. I did eat a blueberry scone.

I was so confused on time because every time we stopped, I had to change my watch. Just think, in Seattle time, I woke up at 1 in the morning. 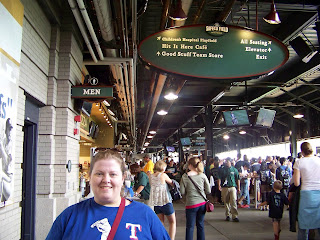 When we got to Seattle, our bags were in middle of this room. They did not even look at our IDs to make sure they were ours!

We couldn't check into our hotel yet, so we walked to go eat at a dinner that had a Route 66 theme and Hawaiian night. Weird. We didn't have dessert then, but most had blueberries. 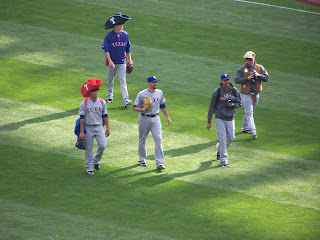 When we got to the room, guess what!? We took a nap! We decided to go take the train in and go to the game tonight since Yu was pitching. Big mistake. King Felix was pitching and we lost 7-0. 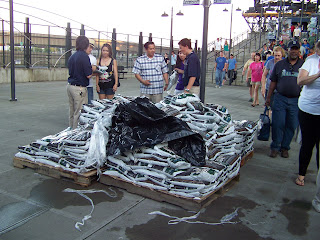 Oh, and we thought the game was 7 instead of 6, but we arrived just in time. It was great timing actually.

I ate a cupcake at the game. Have you ever eaten a cupcake at a Ranger game? And these weren't for Tom and Steve in the TV booth. 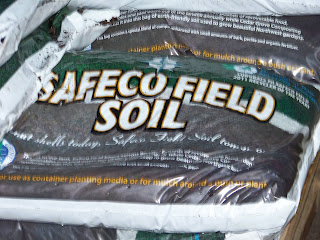 After the game, we saw something really strange... They were giving away bags of dirt for your garden. I told the guy that the airport already told me that my bags were too heavy to go shopping. I took a picture.

And Dear Paigey's response back:

The Ranger game last night looked like the corsicana baseball game last night for the world series. We went home 11-1 and 2nd place trophies 2 yrs. in a row.  I am glad y'all are having a great time getting up early and I miss you so much already. I love you and your a little odd for eating a cupcake at the ranger game and seeing people sell dirt. You email was awesome I loved it thank you for keeping me updated have a great time and eat Canadian bacon for me so I don't have to eat throw up ham Love you MOSTEST!!!!!!!!!!!!!!
Al Albuquerque... he mother was a little retarted???.