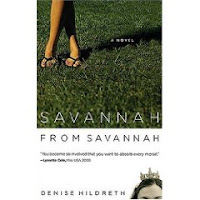 A couple of days ago, I finished reading Savannah from Savannah by Denise Hildreth. This was one of my 49 cent purchases at Mardel's. Denise stopped by my little blog and commented back when I mentioned that I would be reading this book next. Denise wasn't sure she was happy that I found her book for such a bargain. If it makes her feel any better, I did just buy two more of her books at full price at Barnes & Noble with my gift card!

In Savannah from Savannah, Savannah Phillips has just finished graduate school and is an aspiring writer hoping to become the next great American novelist. And she might have too, if she weren't convinced that her mother, "Vicki", rigged a writing contest that she entered. Trying to prove that she could make a career on her own, Savannah moves back home to the city her mother lives for, Savannah.

Savannah secures herself a job with the local newspaper and sets out to become the city's next great human interest columnist, trying to fill some very big shoes. Frantically searching for a story for her first column, Savannah thinks she's hot on the trail of revealing some questionable activities surrounding previous Miss Georgia United States of America pageants.

Although she hates the pageant world, I have to say that Savannah is a bit of a drama queen and can certainly be outspoken. Some of the other characters in the story are down right hilarious such as Vicky, and Miss Amber Topaz. Both reminded me of a former beauty queen I met once upon a time.

I've always enjoyed reading, but I really enjoy reading books that much more when they are set in a city that I have been. Over the past several years, I've been fortunate to visit a number of new cities, and I loved that I could perfectly picture what the author was describing having been to Savannah before. Denise even mentioned the Forrest Gump bench that I posted a picture of before. And Paula Deen's Lady & Sons restaurant. Yum.

I used to be able a novel for enjoyment and not really get a take away message from it, but lately every book that I've picked up and read resonated with me somehow. The final pages of the book, held a little insight into a lesson I've been trying to teach myself lately. Amber the pageant queen is talking to Savannah and says, "I've spent my entire life allowing other people's opinions to define me. And I made a decision that I'm not going to do that anymore." Two sentences among 324 pages, but they jumped out at me profoundly.

Of Denise Hildreth's two other books that I bought, one is a stand alone and the other is the third in the Savannah series. B&N didn't have the second book in the series, so I'm going to have to get it next time I buy on Amazon. I have several other books in my stack to read, but I'm going to come back to Savannah later.

For some reason, most of the books I've read in the past year take place in Georgia or South Carolina which is where I went on my last real vacation. I have started Neta Jackson's Where Do I Go?, so now I get to go back to reading about my favorite city to visit, Chicago.

Enjoy some of my photos from Savannah! 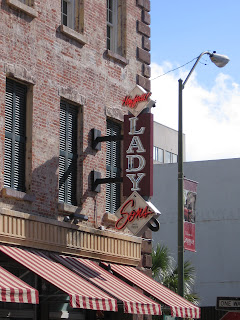 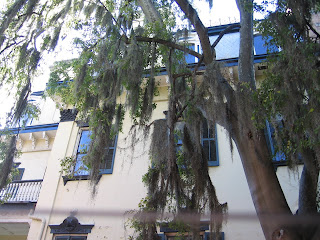 For anyone who has ever taken a tour of Savannah: "Spanish Moss is neither Spanish nor moss. It is a member of the pineapple family." In the book, Savannah's mom would probably have you fired if you didn't say that. "Vicky" is the head of the chamber of commerce and dresses up as a tourist to evaluate tour guides. I'm really surprised the Spanish moss line didn't make the book. 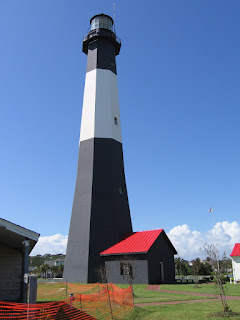 The book also tells about Tybee Island. I climbed to the top of the lighthouse by myself, and got quite dizzy coming back down. My legs were quite wobbily too. 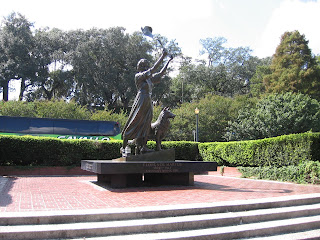 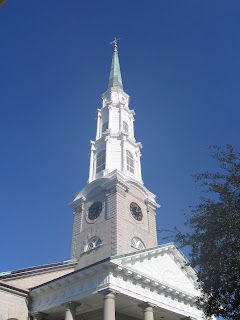 Forrest Gump's feather flew over the top of this steeple in the opening scene of Forrest Gump. 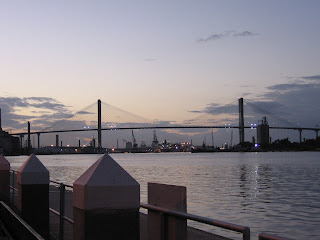 The bridge over the river into South Carolina. Except we didn't take that bridge. Long story... 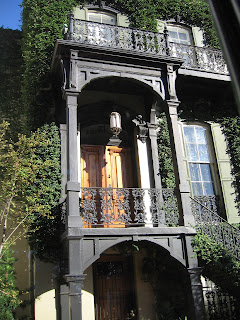 I just thought this was a cool picture. 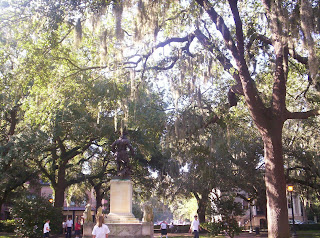 This is the square behind Forrest Gump as he waits for the bus, contemplating the box of chocolates. 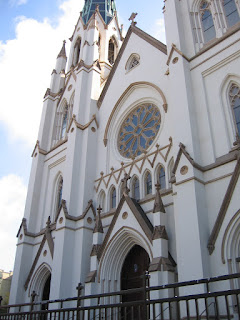 My parents let me out of the truck to get this picture and almost got lost going around the one way streets trying to figure out how to get back to pick me up.

Posted by Audra Jennings at 9:06 PM

Email ThisBlogThis!Share to TwitterShare to FacebookShare to Pinterest
Labels: books