What Would You Do to Save the Life of Your Child? 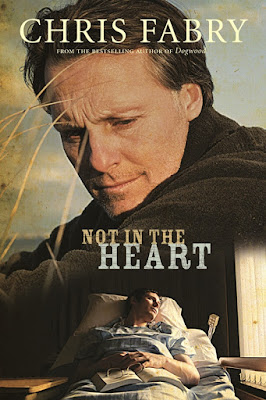 Award-winning author and popular radio host
Chris Fabry explores ethical dilemmas
in his latest release, Not in the Heart

If your child needed a life-saving heart transplant, how far would you go to make it happen? How would you feel if a man convicted of murder offered his heart to your child? What if you discovered the man was innocent, but the only way your child could live was to hide the truth? “I’ve found the only thing I can control is how well I tell the story and follow the truth. . . . The truth will always lead you to a good place,” reflects Truman Wiley, the main character in Chris Fabry’s newest novel, Not in the Heart. Fabry passionately delves into hot topics such as capital punishment, gambling addiction and organ donation, leaving readers to examine their own lives and views.

Chris Fabry has had an impressive career. He has written more than seventy books for children and adults. Last year, his novel Almost Heaven won the ECPA Fiction Book of the Year Award and a Christy Award for Outstanding Standalone Contemporary Novel. He has spent decades as a radio talk show host for Moody Radio and in 2008 was named “Talk Show Host of the Year.” In his latest book, Not in the Heart, Fabry tells the story of a father that faces an impossible situation while his world is falling apart.

Not in the Heart explores the life of Truman Wiley. Wiley once reported news stories from around the world, but now the only troubling headlines are his own. He’s out of work, separated from his family and buried in debt. His gambling addiction is out of control, but, above all else, his son needs a heart. When his estranged wife presents the opportunity to write the story of a death row inmate willing to donate his heart to Truman’s son, he takes the bait. And as the execution clock ticks, he will uncover disturbing evidence that may point to a different killer. For his son to live, will an innocent man die? As the investigation escalates, Truman will be forced to face his failures and make a choice that will change his life, his family and the destinies of two men forever.

Not in the Heart is a story of redemption—the story of two men’s lives who bear the consequences of their addictions and receive a second chance. Unfortunately, addiction has become commonplace in our culture, with the effects not only impacting the individuals but also those around them. This story will encourage anyone who has a loved one battling addiction.

Fabry has been praised by reviewers for being a compelling storyteller. He uses that gift to get inside the head of a father who has failed his family and himself—a man who has grown so numb from life’s experiences that the only way he knows how to cope is through gambling. Yet this broken man is called to save another’s life in a way that will shock readers.

Chris Fabry draws his readers into the lives of his characters, and as a result they face themselves. While acknowledging their frustration with Truman, readers will be forced to examine their own mistakes and weaknesses. The book also explores the controversy over organ donation by prisoners. Murder, suspense and broken relationships will keep readers peeling back the layers to discover the truth that lies deep within the heart.

The release date in February coincides with observances that create a greater awareness of the issues brought forward in the book. National Organ Donor Day, as designated by the U.S. Department of Health & Human Services, is set for February 14. The National Council on Problem Gambling (NCPG) will be observing Problem Gambling Awareness Week March 4-10, 2012.


Bloggers may request a copy by filling out the form below:

Unknown said…
Very nice blog! I'd like to exchange links with you. I have already added you to my favorite blog.

The link of my blog is photographymc.blogspot.com

There's something you may be interested in, on my blog started a free online photography course, that includes over 200 lessons at this link: Free online Digital Photography Course
February 1, 2012 at 5:35 PM